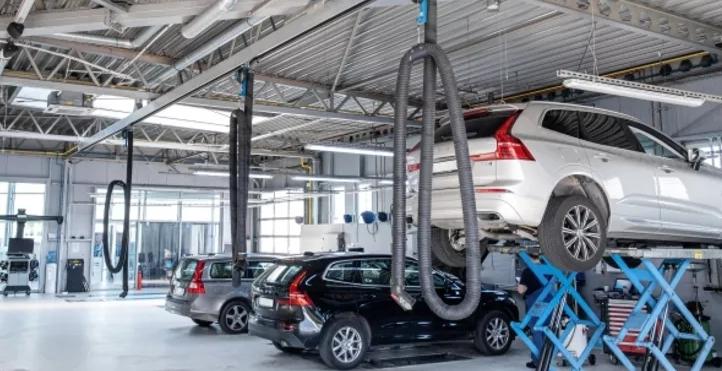 According to the Labor Code, the basic obligations of every employer include protecting the health and life of employees by ensuring safe and hygienic working conditions. And these can significantly worsen large amounts of exhaust gas emitted by vehicles.

The content of the code is completed, among others, by Ordinance of the Minister of Labor and Social Policy on general occupational health and safety regulations, Ordinance of the Minister of Health on occupational safety and health related to the presence of chemical agents in the workplace, or health and safety instructions in every car repair shop. The employer is obliged to organize the work (in this case, a car repair shop) in such a way as to prevent accidents, injuries and occupational diseases. An employer who treats the health of his employees irresponsibly, and thus does not comply with the Labor Code, does not go unpunished. In the event of an inspection by the National Labor Inspectorate and finding irregularities, it may be fined up to $10,000.

What and how harms our health

There are many threats to health and life for employees in the car repair shop. However, limiting ourselves to the topic of the article, i.e. the lack or improper ventilation in the workshop, the random events threatening employees at the workplace include poisoning or suffocation. Both cases are caused by engine exhaust gases containing harmful, asphyxiating and toxic chemicals (e.g. nitrogen oxides, carbon oxides or hydrocarbons) and solid particles. According to research by the World Health Organization, diesel engine exhaust has a confirmed carcinogenic status, which places it in the same harmful group as asbestos. In the case of exhaust gases produced by gasoline engines, it is currently considered that they can cause oncological diseases. It should be remembered that diesel exhaust fumes were once considered a possible health hazard, before this status was confirmed by many years of research.

The regulation of the Minister of Family, Labor and Social Policy on the maximum allowable concentrations and intensities of factors harmful to health in the work environment sets the values ​​into three groups. The first one contains the maximum permissible concentration (NDS), the impact of which on an employee during the 8-hour daily and average weekly working time should not cause negative changes in his health and the health of his future generations. In the second group there is the maximum permissible temporary concentration (NDSch), which should not cause negative changes in the health condition of the employee, if it occurs in the work environment for no longer than 15 minutes and not more than twice during a work shift, with an interval of not less than one hour. The third group regulates the maximum permissible concentration (NDSP), which, due to the threat to the health or life of the employee, may not be exceeded at any time in the work environment.

Classified chemical concentrations harmful to health listed in the regulation also apply to chemical compounds present in engine exhaust gases. How to interpret values? Where is the point of reference to understand the scale of the problem and its dangers? The most common cause of poisoning is breathing air contaminated with benzene vapor. In the tests carried out in the workshop by the Chemical Harmfulness Department of the Institute of Occupational Medicine and Environmental Health in Sosnowiec, the concentration of benzene in the air emitted from the diesel engine was 0.007–5.09 mg / m3 with the norm of 1.6 mg / m3 NDS. In case of breathing with air containing more than 2% of benzene, death occurs after 5-10 minutes as a result of irritation of the respiratory center.

Another chemical compound present in the exhaust gas – carbon dioxide, whose concentration in rooms should not be higher than 0.5%, causes the first negative symptoms in the body at just 0.2%. When it reaches the level of 7-10%, there is a loss of consciousness. Carbon monoxide resulting from incomplete combustion of coal works even faster. The data leaves no illusions – just 0.64% of the volumetric concentration in the air is enough for death after 30 minutes.

Eliminating exhaust fumes in the workshop

It is worth starting the elimination of exhaust fumes from the workshop by dealing with the myth of ventilating the room by opening the entrance gate and tilting the windows. The air movement generated in this way is uncontrolled and may make it difficult for workers to perform their activities, and the draft does not provide exhaustion of all harmful substances contained in the exhaust fumes. There is a risk that some of the toxic chemicals will remain in the room – concentrated near the floor, in sewers and in all recesses. Engine exhaust hoods are used to effectively eliminate engine exhaust fumes from confined spaces at the source of their formation.

From the functional side, engine exhaust hoods can be divided into two groups:

From the construction side of the device, we can group it into:

How to plan the installation wisely?

Although each exhaust extractor is used to eliminate exhaust fumes, and in addition it has the same elements included in the equipment (e.g. fan, hose or exhaust hood), it does not mean that by choosing the first model of the device, we will ensure the best possible functionality and high ergonomics of work. This is determined by, for example, the efficiency of the fan, the diameter of the hose or the method of installation. It is worth remembering that a given technical solution will not work in every workshop. The selection of an exhaust extractor is a multi-threaded process, closely related to the workshop space. Self-selection of the device may turn out to be unsatisfactory during use, therefore, as in many cases, also when choosing a fume extractor, the principle “it depends” applies.

The recommended method helpful in planning the installation of a flue gas extractor is contact with an advisor of the company offering this type of equipment. Based on the answers to skillfully asked questions, he will be able to propose the best solution, and in cases requiring it, he will come to the site to take measurements.